Blessed! (or cursed…depending on your point of view!)  Two snow events in the same year! Lucky for us, they were during the same week. So, we have yet another snow day, and we are off from school.  The kids are not nearly as excited about the snow

today, as they were about the snow event on Friday. However, everyone did go outside and play this morning.   Even though the kids were less excited; Lucy was ecstatic! When we let her outside earlier today, for her morning business she stood at the window peering in as if to say, “Hey, why didn’t you come outside with me?” 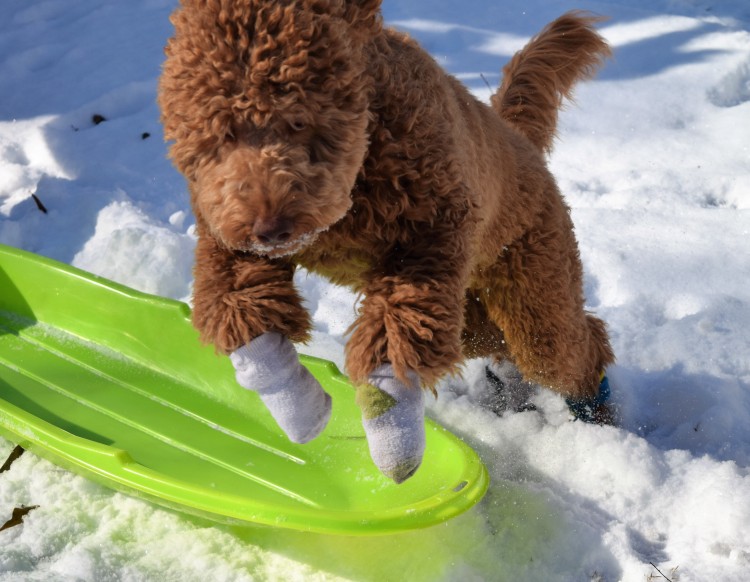 Later, I decided to brave the cold and took her outside to play. Before we went outside, I tried putting socks on her feet, so that I could keep the snow from sticking to her paws. Once outside, the socks (on the feet) lasted only a few seconds in the snow. They ended up scattered all over the back yard.

I then took Lucy out into the front yard where my granddaughter was playing (all the other children had quickly given up and gone back inside). The granddaughter started throwing snow balls, and Lucy began trying to catch them.  The song that started rolling along inside my head was to the tune of ‘We Will Rock You’.  It went like this…. Snow on my face, not a big disgrace, having fun all over the place. Snowball, Snowball catch it!

We didn’t stay outside long. Apparently, we can only really handle one snow event per year.  Nobody could find their snow gloves this morning (including me). With temperatures in the teens today, no gloves equal very frosty hands.  Signing off for now… from our very own Snow City.  Until next time…

Hi! We are Laurie and Joe, Full-time RV-ers, who love travel and adventure with our "doodle-dog" Lucy, in our 330sqft Bounder Motorhome. We love learning about the locations we visit and the people and cultures we encounter in our travels. View all posts by 330sqft

We are Joe and Laurie. We are full-time RVers, an. Join us as we explore the ins-and-outs, dos-and-donts, and the many adventures of 330sqft living in a Bounder Motorhome.