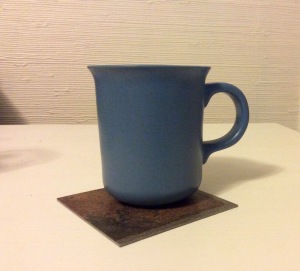 I love early mornings in my house, and it is because I love early mornings at my house, that I dislike them. Let me explain: My morning begins with the ringing of the alarm clock. Now, when that alarm clock rings, I lay as quiet as possible, because I know that my loving husband will pull himself from a peaceful slumber, and take the puppy from her kennel out into the yard for her morning business. Then, my husband, Joe, will bring me a piping hot cup of strong, black coffee. While the smell of rich coffee is penetrating my senses, he will put our very soft puppy on the bed for some early morning puppy snuggles.

Lucy doesn’t like to snuggle for very long, so we get up, coffee in hand, and move to the quiet living room. With the hush of morning still in the air,  Joe, Lucy, and I begin to play and work together, and with the increasing excitement, it is almost like we are waking up the morning itself.  I love to slowly pet our new pup as we wake up, and then train her with the clicker; However, our training/playing session usually ends with a fast paced game of fetch.

Then suddenly, I become aware of the time. Most days, I notice that is it already 6:35 or later, and we have to leave the house at 7:10!   At this point I cringe, because….well because, I became distracted, lost in time, and so I know the worst of times is about to begin.  I have not showered or dressed, applied make-up, fixed my hair, nor a myriad of other personal stuff. Plus, not even one of the four children is out of bed yet. Ok, you get the picture.

So, I simply say to myself, “Let the mayhem begin!”, and so begins the “official” start of a day that resembles the Spike Jones song “Beetlebaum”.   I pet the pup quickly on the head, rush first to the boys room and say, “OK guys, time to get up, we are running late, again. It’s already 6:40 and we are leaving here at 7:10.”   Then, I leave the boys room, run through the den past the puppy to the granddaughter’s room, and again give my early morning greeting.  After delivering my bad news to the granddaughter, I once again dash past the puppy back to my room, so that I can quickly grab my morning shower. It is at this point that I notice that grandson number four is still in his bed, pretending to be a rock.  I again ask the child to remove himself from his comfy bed, to which he replies, ” I do not have any clothes.” I then zoom, back into the den, past the puppy, who at this point is getting pretty wound up from the commotion I am causing by running through the house like a madwoman.  I grab my grandson’s clothes out of his clothes-cubby, throw them into the boy’s room, hitting the bed with all of the finesse of Michael Jordan. Then with a mad dash, I hit the shower.  After my shower, and managing to throw some clothes on, I zoom through the house checking on the progress of my “reluctant to go to school” charges. It is at this point that I notice grandson number four still in the bed, imitating a rock. I inform grandson number four that he is in danger of going to school in his pajamas. The child then begins to move at the speed of a snail. Meanwhile, the puppy – remember the puppy?  She is not moving at the speed of a snail. Instead, she is charging through the house, barking at anything that moves.

Finally, I have the puppy secured into the kennel, breakfast served and eaten, backpacks packed, my own self put together, and we are out the door, with five extra minutes to spare.  Whew! We did it!

Hi! We are Laurie and Joe, quasi-full-time RV-ers, who love travel and adventure, and our "doodle-dog" Lucy, as well as quiet moments with our family. We also love learning about the locations we visit and the people and cultures we encounter in our travels. View all posts by 330sqft 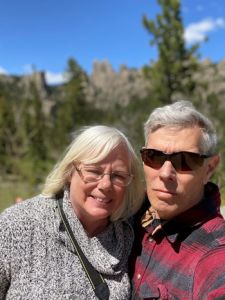 We are Joe and Laurie. We are quasi full-time RVers.

Join us as we explore the   ins-and-outs, dos-and-donts, and the many adventures of 330sqft living in a Bounder Motorhome.