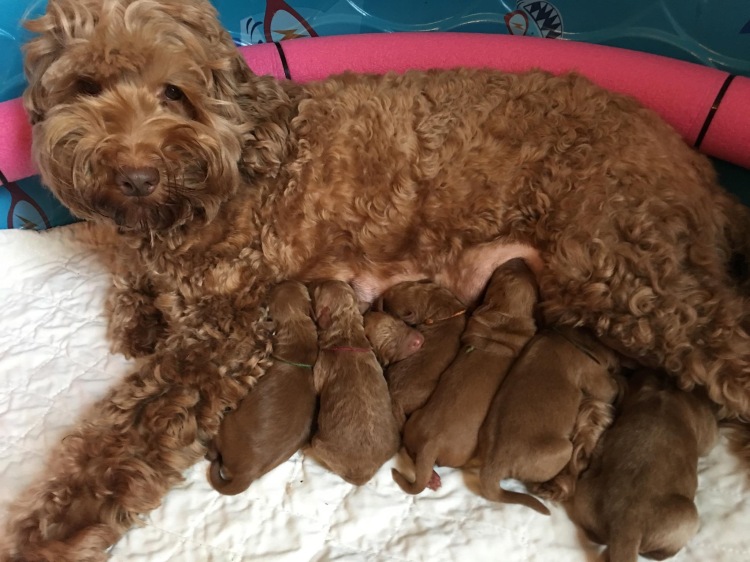 Welcome to my blog about Lucy.
Lucy is a Labradoodle puppy. The truth is that we have not met her yet. We’re just getting over the loss of our last dog, Maggie.

Our last dog was a beautiful, little, timid Cocker Spaniel named Maggie. Maggie was very shy and fearful, therefore she never adjusted to our busy, noisy lifestyle. We adopted her as a pup, and over time she became very nervous and anxious. We tried everything to help her cope. We sought the help of two dog behaviorists, and we tried a variety of antidepressants.

Maggie might have been a great dog for an older settled couple who did not have any children, but she did not thrive in our home. We have a large multigenerational family. Our family dynamic includes one great-grandma, two grandparents, one mom and four children (currently ranging in ages from 11 – 6). At around nine months of age, Maggie began to bite and snap at the kids for no apparent reason. After she started biting, our family rule was that children do not touch Maggie. Ever! Maggie and the children were able to co-exist and live peacefully until she became ill. As they were never allowed to pet her or play with her, the children have learned a heathy respect for dogs. Too healthy! They are scared to touch any dog now, which is understandable. We want a pup with a great temperament, and who will fit into our large, busy family of eight.

One thing, I loved about Maggie was that she did not shed much. It was nice not to have to sweep up mounds and mounds of dog hair every day. A good dog for us would be a non-shedding, allergy friendly dog, who likes kids and is not scared of a noisy, busy house.

I decided to investigate Labradoodles because I have seen them at dog parks and at the groomer and I have been impressed with their very gentle easy going nature.

This is what I ultimately discovered — the short version:

Good Australian Labradoodle breeders say that the pups are bred for good temperament and health! My kind of dog. However they are very pricey. The Australian Labradoodles cost anywhere from $2,500 to $3,000. My family thinks $2,800 for a dog is too much money. But to me, it is an investment. I hope it’s a good investment. I am excited about getting a new dog, and I am apprehensive as well. I have looked for blogs about people actually living with a Labradoodle, and I have not found any. So, I decided to write a blog about living with our new four-legged friend. Currently, the pups we are interested in are two weeks old. The breeder has a live puppy cam so that we can watch the pups grow. I am amazed how much they have grown in such a short amount of time!

Hi! We are Laurie and Joe, Full-time RV-ers, who love travel and adventure with our "doodle-dog" Lucy, in our 330sqft Bounder Motorhome. We love learning about the locations we visit and the people and cultures we encounter in our travels. View all posts by 330sqft

We are Joe and Laurie. We are full-time RVers, an. Join us as we explore the ins-and-outs, dos-and-donts, and the many adventures of 330sqft living in a Bounder Motorhome.